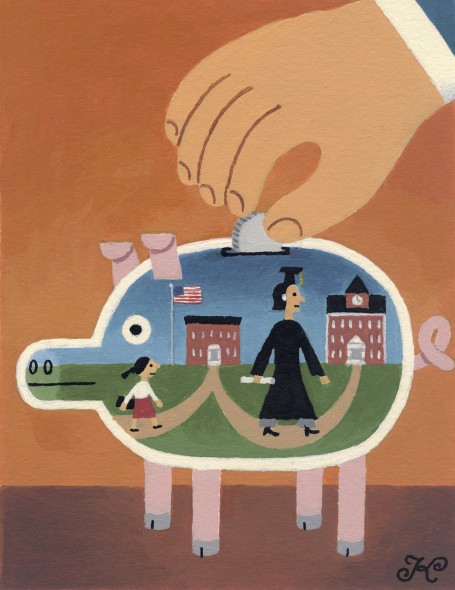 [It’s less about the fullness of the cup and more about just having a cup. A study finds that students who save between $1 and $500 for college are four times more likely to graduate than students with no savings at all. An article in the National Journal (shared below with permission), A College Savings Account for Every Child, shines a light on states that have developed pilot programs that open savings accounts for low-income children. Featured is Ascend Fellow Reggie Bicha, executive director of the Colorado Department of Human Services who, in the coming year, will pilot a savings account program for 2,000 low-income students in the Colorado Preschool Program. This two-generation strategy is a stake in the ground to encourage both children and their parents to think and plan for their own and their children’s postsecondary education. For further background, see Children's Savings Accounts on work of Ascend Fellows Reggie Bicha and Andrea Levere. Frances Robinson, Ascend at the Aspen Institute.]

From: The National Journal

States, cities, and counties hope that starting savings accounts for kids will encourage parents to plan for their children's postsecondary education. The amount families save may not matter, says Reggie Bicha, executive director of the Colorado Department of Human Services (which is partnering with two other state agencies on the pilot program). "What matters is that they learn early about the importance of saving—that they see college as a reality in their children's future."

Indeed, research suggests that even small nest eggs can increase the odds that a child will earn a degree. A 2013 University of Kansas analysis of the Panel Study of Income Dynamics, a long-running survey, found that low- and middle-income students who had saved between $1 and $500 for college were over three times more likely to enroll and four times more likely to graduate than students with no savings.

Researchers at Washington University in St. Louis are conducting a randomized controlled trial to test the effect of giving newborns 529 accounts. Thirty months after the experiment began, 16 percent of families that received $1,000 in a state-owned account had opened up 529 accounts of their own, and about 8 percent had started to save in them.

Those percentages may sound small, but in most states only about 3 to 4 percent of children under 18 have a 529 account in their name, says Michael Sherraden, director of the Center for Social Development at Washington University. Families given a state-owned account were more likely to open (and use) an account of their own. In general, wealthier and more-educated parents were more likely to begin and use accounts, but the researchers also found that receiving a state account inspired some less-well-off families to open accounts. Children who received accounts in the study showed better social and emotional development by age 4 than those who didn't, and their mothers were less likely to develop symptoms of depression.

The idea that the government should establish savings accounts for all children has been circulating since the 1990s. In 2005, a bipartisan group of senators proposed creating savings accounts for every newborn, but the idea didn't become law. While support at the federal level has stalled, local programs have taken off—in San Francisco; in Cuyahoga County, Ohio; across the KIPP charter-school network.

It's still not clear how best to design these accounts or what level of public, private, or family contributions will make the biggest difference. Bicha's team has proposed a three-year pilot in Colorado that—like many similar programs—would operate as a public-private partnership. The state would open 529 accounts for children attending state-funded preschool, and private donors would match a portion of family savings with donations. (To be eligible for the Colorado preschool program, children must be from disadvantaged families.)

Bicha hopes to prove that the link between saving for college and doing well in school will hold for very young children. He wants "to show that children who have a children's savings account … will be more likely to be prepared for kindergarten on our kindergarten assessment, that they'll be more likely to read in third grade when we do our third-grade reading scores." Most of all, he wants more parents to believe that their preschooler is college bound.