Two-generation (2Gen) approaches build family well-being by intentionally and simultaneously working with children and the adults in their lives together. 2Gen approaches center on the whole family to create a legacy of educational success and economic prosperity that passes from one generation to the next.

Two-generation (2Gen) approaches build family well-being by intentionally and simultaneously working with children and the adults in their lives together to access new resources, solve problems, and sharpen existing skills. 2Gen approaches center on the whole family to create a legacy of educational success and economic prosperity that passes from one generation to the next.

About the 2Gen Approach

2Gen approaches recognize whole family units, as families define themselves, in order to understand the multiple dimensions of family life and consider a variety of pathways for promoting positive, pragmatic, and effective outcomes for everyone. We work with families as experts and meaningfully engage parents and caregivers in designing policies and programs that affect them in order to develop holistic, integrated, and equity-focused solutions. This family-centered lens helps us to immediately identify families’ needs and goals and informs integrations and alignments to programs that serve them, which maximizes long-term impact for families and communities. 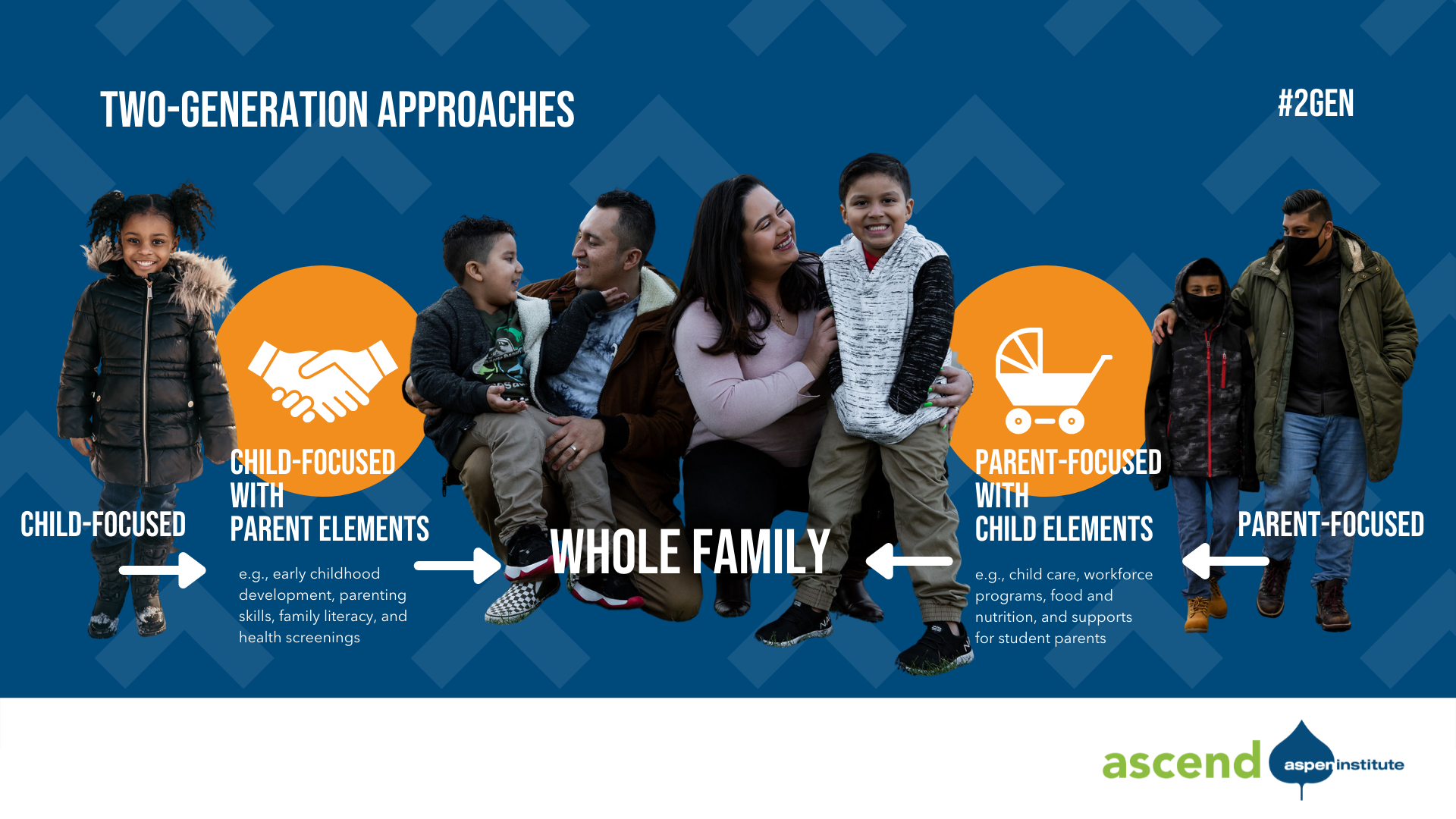 Many programs focus solely on the child or the parent(s), but 2Gen approaches do not focus exclusively on either a child’s development or isolate an adult’s needs because their well-being is interconnected and interdependent. 2Gen approaches aim to integrate services and supports to move the whole family forward, benefiting both the child and the adult(s) in their lives.

The Origins of 2Gen

The 2Gen approach recognizes family as fundamental to human development. This intuitive link between individual and collective success has long been recognized by indigineous communities in the U.S. and around the globe, but supporting entire family units wasn’t employed as a formal, federal strategy until the early development of the human services sector in the late 19th century.

The term “2Gen” was coined in the late 1980s by the Foundation for Child Development to reflect programs that were emerging across the country.  2Gen approaches continued to gain traction throughout the early 2000s, and reemerged in 2010. In 2012, in partnership with a group of philanthropic partners, Ascend at the Aspen Institute published the “Two Generations, One Future” report that laid the groundwork for the growth and development of the 2Gen field’s expansion. Then, with a decade of accomplishments and learnings from its Network of partners and Fellows, Ascend released the landmark “State of the Field: Two Generation Approaches to Family Well-Being” that outlines our vision for exponential expansion and implementation.

The“two-generation” or “2Gen” approach has been and continues to be referred to by many names within and across the field – “whole family,” “intergenerational,” “Ohana Nui,” “multigenerational,” and “multi-gen” – which all encompass the same fundamental principles: 2Gen approaches reflect and embrace the diverse shapes, sizes, and structures of families to ensure all family members can reach their full potential.

The Reach of 2Gen

Through the Ascend Network, more than 450 organizations from all 50 states, the District of Columbia, and Puerto Rico implement 2Gen approaches in policy and practice to increase families’ economic security, educational success, and health and well-being.

Meet the Network
Find a Network partner near you

There are countless essential experiences and opportunities that are required for people to reach their full potential. To facilitate connections to these supports, all 2Gen policies and programs are grounded in and guided by 5 core principles.

Learn about the Principles of 2Gen

Well-being is a multifaceted process and lifelong pursuit. An individual’s or family’s well-being isn’t a solo endeavor, and financial, social, mental, and spiritual health depends on a person and family’s context, the resources and opportunities available to them, and the support of others. 2Gen approaches have a robust vision to improve conditions for families by coordinating equitable access to the systems and structures that are necessary to thrive economically and socially. Ultimately, 2Gen approaches recognize six key components to improve families’ financial stability, social capital, health care, and quality education. 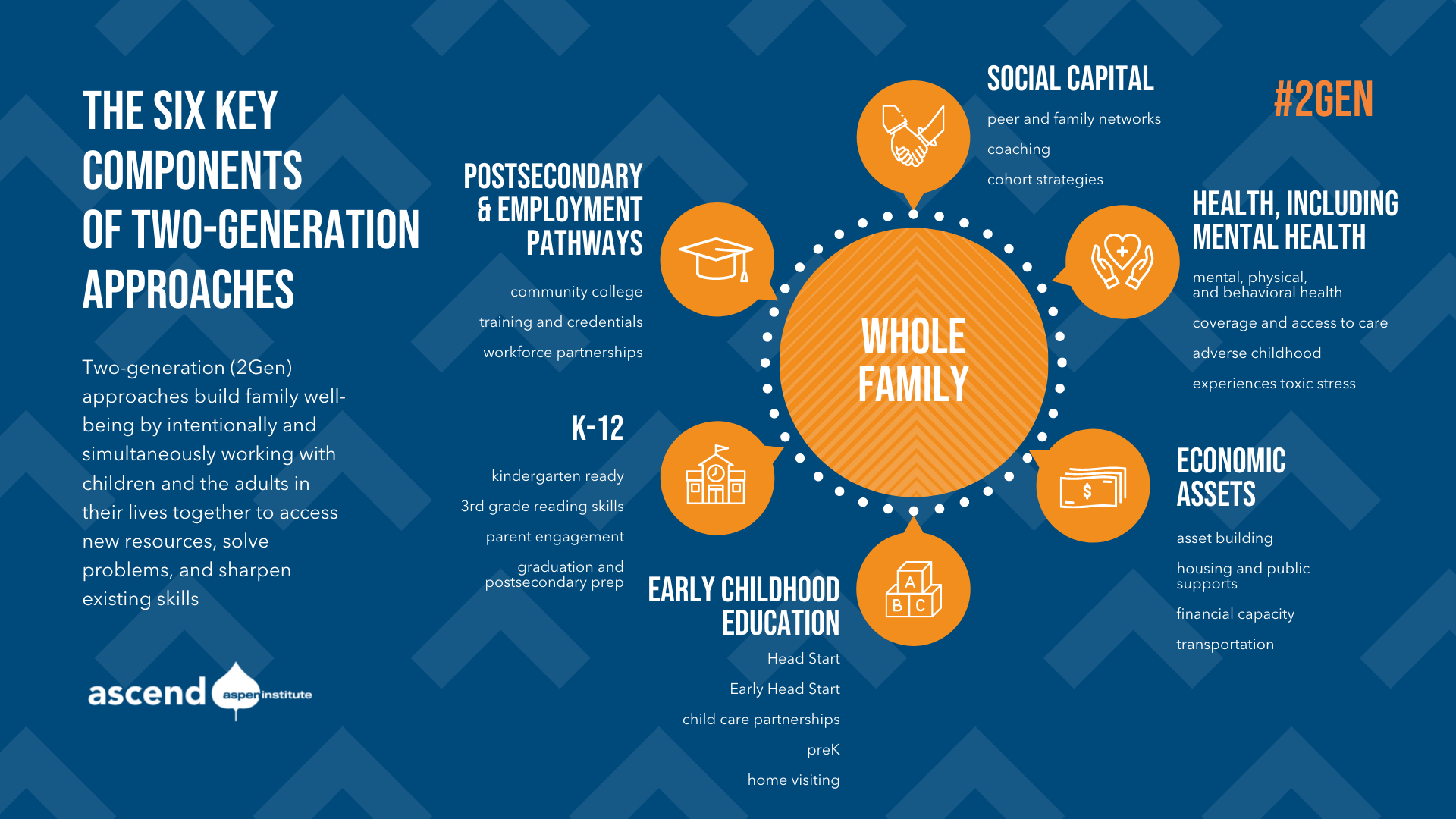 Social capital accounts a person’s connections to other people, information, and opportunities to give and receive support. It’s a novel and key success factor to the 2Gen approach as it builds on the strength and resilience of families and bolsters the aspirations parents have for themselves and their children. Social capital manifests as peer support; contact with family, friends, and neighbors; participation in community and faith-based organizations; school and workplace contacts; leadership and empowerment programs; use of case managers or career coaches; social networks, such as cohort models and learning communities; and mental health services.

If a child is unwell, it can affect attendance and learning in school. Similarly, a parent’s illness can impact ability to earn or perform at work. Physical health and mental health, a component of the two-generation approach, have a major impact on a family’s ability to thrive Childhood trauma, for instance, has lasting health and social consequences. Similarly, economic supports, such as housing, and social capital, such as connections to one’s neighborhood and community, are important social determinants of health. The dynamics of federal and state health care access policies through Medicaid are critical factors in identifying barriers and opportunities for increasing the health and well-being of children and their parents.

Financial stability is critical to a family’s economic and social mobility. These assets include housing, transportation, financial education and asset building, tax credits, student financial aid, nutrition assistance, and more. A relatively small increase in household income can have a significant, lasting positive impact on the life of a child. A $3,000 difference in parents’ income when their child is young is associated with a 17% increase in the child’s future earnings.

More K-12 schools are adopting two-generation approaches. Schools serve as community anchors and provide strong platforms for both children and the adults in their lives to thrive.

Parents who complete a college degree double their incomes. A parent’s level of educational attainment is also a strong predictor of a child’s success. Our Postsecondary work includes a focus on higher education, including colleges and universities, as well as workforce development programs.