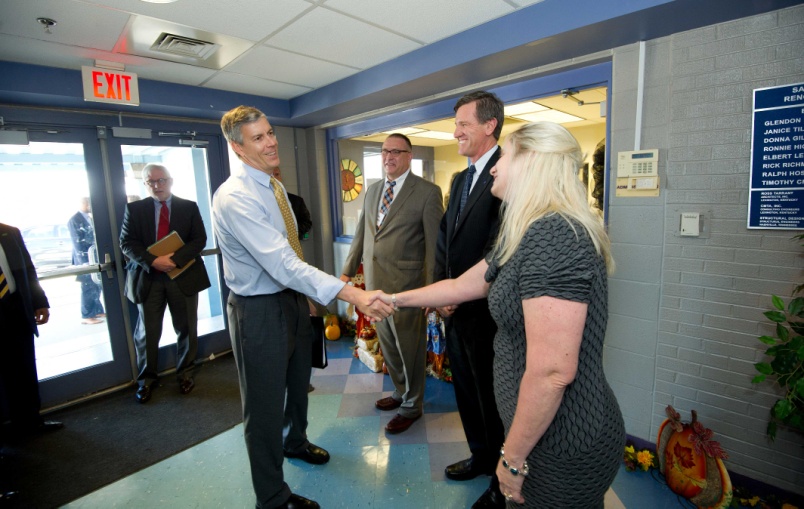 Above, participants at the Summit discuss public-private partnerships in rural America

A few months after his January 1964 State of the Union speech, President Lyndon B. Johnson stood on the front steps of a home in East Appalachia, Kentucky and declared a “war on poverty” in the United States.  The site was strategic – Kentucky had endured decades of increasing rates of hunger and joblessness.  A region rich in cultural traditions, Appalachia was also geographically isolated, struggling to keep pace with the educational and industrial advances of the rest of the country.

Nearly fifty years later, I was fortunate to travel through some of the same Kentucky counties President Johnson toured – minus the media pack and plus a few determined home visiting specialists –  for the Rural Education Summit.  Hosted on November 21-23 by Berea College, the Summit brought practitioners, policy experts, and philanthropic leaders together to discuss opportunities for improving educational outcomes for families in rural America.  Berea is the anchor partner for the country’s first rural Promise Neighborhood implementation grant, spanning three counties and dozens of partners, including public school systems, home visiting programs like Save the Children, and local employers.  One question Summit organizers sought to answer was a tricky one – can the Harlem Children’s Zone (HCZ) model, on which Promise Neighborhood initiatives are based, apply to a rural context?

"There would be differences that would be stark, but the underlying approach would be the same," said HCZ founder Geoffrey Canada during his keynote.  HCZ, as Canada pointed out, is a tightly-packed 100-block neighborhood with many nearby resources, from grocery stores to benefits access offices.  “Rural poverty is tough,” Canada conceded, “but you are educating children, and doing it early, and that intervention point is what counts.”

From my perspective, I was eager to see how Berea might adopt a two-generation framework as a number of Promise Neighborhood Initiatives have – including those in Washington, DC, and Langley Park, MD., and .  I spent my second day in Kentucky traveling with a home visiting specialistwho works with twenty families to equip them with skills like reading and good eating habits.  I was struck by the resilience of the parents I met, but also the lack of good jobs for them.  One mom told me she had given up her job because the gas money she budgeted for her commute was now needed to pay for her children’s school bus due to cuts in transportation spending.  Access to quality healthcare and postsecondary education is a challenge for parents in rural areas like Appalachia as well.

Despite these barriers, the Promise Neighborhood is making big strides toward integrating opportunities for Kentucky children and their parents, such as a canning program that helps teach families how to “put up” their food for winter as well as develop a potential living-wage skill.  There’s also increased efforts to engage parents in their own learning, through parent support groups at local Head Start sites.  And later this month, fifty years after LBJ committed to partnering with rural America on poverty alleviation, President Obama will announce the recipients of his Promise Zone grants.  One of them will be a rural site, Berea Promise Neighborhood leaders hope it will be in Eastern Kentucky.