Living on the Smallest Paychecks: An Ascend Analysis 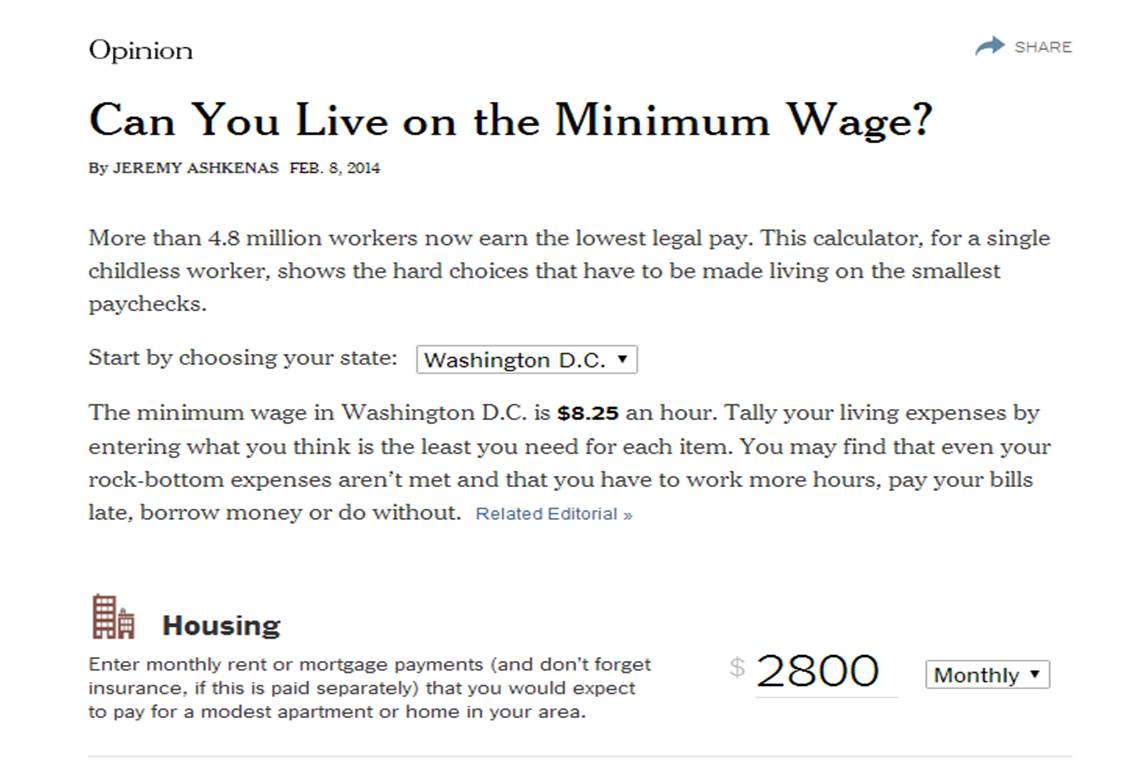 Can you live on the minimum wage? The New York Times recently posed this question on its website, noting that more than 4.8 million workers now earn the lowest legal pay. The Times presented a calculator for a single childless worker, showing the hard choices that have to be made living on the smallest paychecks.

The results of the calculator are humbling – and startling. As the site’s developer Jeremy Ashkenas noted, the tool incorporates wage and consumer data from the U.S. Department of Labor and Economic Policy Institute. It allows the user to filter expenses by basic categories against the minimum wage in one’s state (for the District of Columbia, that means $8.25 per hour).  Several Ascend staffers tried the tool, and each of us had our own (unnerving) reactions:

I realized that I would almost immediately default on my graduate school student loans – never mind that if I had worked for the minimum wage prior to graduate school, I likely would not have been able to even earn my master’s degree. I also realized that – based on my current expenses, including a shared mortgage and reasonable health care costs – I would need to work an average extra 80 hours per week just to meet my current living standards. This schedule would leave me approximately 90 minutes of sleep each night, surely a habit that would lead to poor performance on the job! My colleagues had their own reactions:

Child care. If I had to live on the minimum wage, I do not know how I would afford child care. As a working mom, I am grateful every day for a job with the flexibility to take time off when there is a snow day or I have a sick child. That alone is a luxury far too few parents enjoy. But making sure my children have a safe, healthy place to be after school is still my number one worry. Finding quality care is hard enough, but what if I could not pay for it? When I worked my way through the minimum wage calculator, it was clear I would be choosing between putting food on the table and paying for child care. That is not a choice any parent should have to make.

A denial-based existence – this is what came to mind after completing the assessment on earning the minimum wage. Each of my current basic needs would have to be significantly reduced or eliminated if I lived on the minimum wage in Washington, DC. Living on the minimum wage creates an existence based on denial. Which essential need will I be deprived of today? What will be sacrificed tomorrow? I toyed with the tool several times, trying to determine which amounts would get me closer to a decent quality of life. I realized I was playing a game of “robbing Peter to pay Paul.” No matter what numbers I plugged in, I still came up significantly short, with health care the first to go.

The stress of these choices, of living in a life framed by what one cannot have, made me immediately depressed (no help there: I already gave up my health care). People deserve to live their lives with dignity – to know that if they work hard, they will have the opportunity to provide for themselves and their families.

I’m quite sure I would be living in an alternate reality, if I earned the minimum wage.  In the years since we’ve been married and had a child, myself, my husband and my daughter have all pursued higher education.  I can’t imagine any of us successfully completing bachelors or advanced degrees if either myself or my husband (or both of us) had earned minimum wage. And, if we hadn’t completed those degrees, our salaries would remain low.

Currently, my daughter is a junior in college at an in-state school.  We’re on track to have her graduate without any student loans, in large part because of the decision to enroll at an in-state, public university.  Even then, tuition climbs each year, including next year, where we expect a five percent tuition hike.

This exercise brought home the real implications of the fact that my state has cut public funding for higher education. Every tuition increase families absorbed in the past decade can be seen as the result of state decisions to reduce funding.  While most families understand and share the value of higher education, at some point the horizon of experiencing that education as a net gain (as opposed to a bruising asset squeeze) just becomes too distant to be reasonably imagined.  And so another generation goes without.

With my current spending, I would need to work at least an additional 69 hours a week to make ends meet living on a minimum wage, or I would pile up $25,904 in debt by the end of the year. If I made $8.25 an hour, I would have to make difficult choices concerning housing, health care, and student loan debt. For me, the most challenging obstacle about living on a minimum wage would be securing adequate housing, especially in the Washington, DC metropolitan area.

Having been raised by a single mother with six other siblings, I understand the hardships and difficult financial decisions families have to make. This exercise reinforced my understanding of the important work Ascend is undertaking and the need to bring attention to the millions of forgotten Americans struggling to survive.

What about you? Take the minimum wage assessment at the New York Times website.