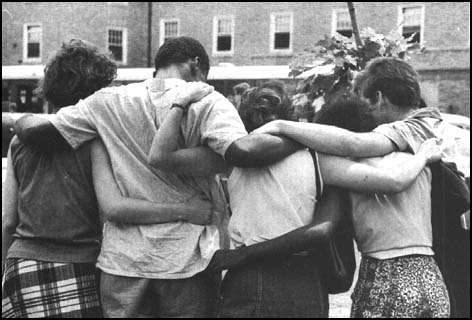 Typically, the summer season means freedom from school for students and from work for adults. This year’s summer arrival also brings the 50th anniversary of Freedom Summer. It is the anniversary of one of the most significant movements to support economic opportunity in the U.S. – expanding the right to vote.

50 years ago, a network of determined volunteers altered the political history of the U.S. south. In the summer of 1964, a network consisting of more than 1,000 students, community leaders, and activists traveled to Mississippi to register African-Americans to vote. Their efforts to empower disenfranchised citizens in having their voice heard and opinions counted, left an indelible mark on U.S. history. Fifty years later, we celebrate the tenacity, sacrifice, and bold vision of these volunteers.

History shows us that the men and women who participated in Freedom Summer, also known as the Mississippi Summer Project, believed in something bigger than themselves. They knew that as a network, they could have a bigger, more concentrated impact on the hate and prejudice of the Deep South that kept many poor communities without a voice.

This summer Ascend will also celebrate the launch of its own Ascend Network – more than two dozen cross-sector, cross-issue projects. These projects are designed to address the needs of and create opportunities for parents and children together – tapping the expertise and best thinking of leaders on a range of issues surround economic security in the U.S. Using a two-generation lens, the Ascend Network will develop dozens of tools and products that will support better outcomes for low-income families across 24 states and the District of Columbia. Through the Network and in partnership with the Women’s Foundation of Mississippi and the Children’s Defense Fund – Southern Regional Office, Ascend is also making its own investment in Mississippi families.

We know that what we can do as one organization is marginal compared to what can be done as a collective, as a network. We hope the Ascend Network taps into the same spirit and commitment to the ‘bigger self’ that fueled Freedom Summer and continues to build economic opportunity for all families in the U.S., now and for the next 50 years.