This summer, author Carrie Morgridge, Vice President and Chief Disruptor of the Morgridge Family Foundation, released her newest book, The Spirit of the Trail: A Journey to Fulfillment Along the Continental Divide, chronicling the 46-day, 2,774 mile-long bike trip of a lifetime that she and her husband, John, completed in the summer of 2016.

It was standing-room-only in Paepcke Library at the Aspen Institute for a book talk with Carrie Morgridge that brought together business leaders, community partners, and non-profit providers from across the country. Moderated by Anne Mosle, Vice President at the Aspen Institute and Executive Director of Ascend at the Aspen Institute, The Spirit of the Trail is at once a deeply personal tale of resilience, a heartwarming account of the generosity of the human spirit and a life lesson on privilege, humility and courage.

Carrie Morgridge talked about the inspiration for the ride, the highs and lows of the grueling 46-day challenge, the people she and John met on the trail, the friends who joined them along the way, and the life-changing lessons they learned as a result, all of which Carrie fondly describes as ‘the spirit of the trail.’ What follows are highlights from their discussion. 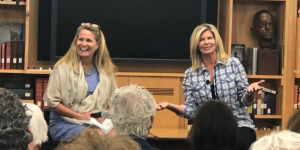 Anne: The Spirit of the Trail spoke to me personally regarding the question, ‘Can you do the one thing you don’t think you can do?’ because for a lot of us, we think about the change we want to make in the world and our contribution to it in terms of what we think we’re capable of. How did you do it?

Carrie: To answer that I’ll describe what a day on the trail was like. Today is August 6th. On this particular day, we were getting ready to cross the Great Basin. We unexpectedly came upon the Wyoming wildfires and essentially were told we could not pass until the fires were extinguished. To avoid encountering fire, we were told we had to go back 300 miles and take a completely different route, which we knew would set us back quite a few days. While back-tracking, we meet-up with a firefighter and he told us to go back down the hill and wait for him. There was nothing at the bottom of the hill – just an old shack, but nothing else. We found sun protection under an old sign, and I pulled out a peanut butter and jelly bagel. Hours later, the firefighter came back. He had called the fire department, validated our story, and said he would clear the pass for us. That’s the ‘spirit of the trail.’ He most certainly did NOT have to do this for us; he could have more easily said, ‘Ma’am, off you go. Do the 300 miles.’

Anne: What is the story behind the story? Not everyone wakes up and says, ‘I’m going to train for 21 days then hit the Great Divide Mountain Bike Route.’ This is not something people just decide to do.

Carrie: I had done nine IRONMAN races; and all that running had fused my vertebrae together, resulting in my needing back surgery in November of 2015. I wasn’t used to the lack of activity following my recovery. I needed a jumpstart to get back into the swing – something different – and I also needed a way to unplug for 60 days. It only took me one day to decide – we were going to do the Great Divide Mountain Bike Route.

Anne: A lot of folks I’ve given this book to or shared the story with say, ‘I could never do it. It would be physically too hard’ and I can’t get away from work’. You have the physical part down, but you love your work so much. What did it really take to organize your life in a way to do this?

I was on a bike, totally unplugged, no music. Before the trip, I was unsure. . . I had questions such as, ‘What will we talk about? What am I going to do when we get to the campsite at night with no internet and no phone service? Will I be bored?’  Being completely unplugged and in nature, I got to think and disconnect in a whole new way. I realized I wasn’t doing what I really wanted to do. It was a jump start to really do what I want to do and, more important, to NOT do what I don’t want to.

Anne: In the book you talk about the physical and psychological challenges. You detail highs and lows, good days and bad ones. Describe an ‘oh my god, am I going to get through this?’ moment; and a super high point, as well.

Carrie: A really amazing high was the Great Basin in Wyoming. It’s almost 100 miles of nothing, no trees, no water – NOTHING. At the same time, there is this unbelievably vast beauty of America—wild horses, wild cows. We were only biking at 11 MPH, and at that slow pace, we really got to enjoy no phone lines, no humans, no cars, just the dirt road we were on. We were just riding on the Great Basin overlooking everything from the top of the Continental Divide.

A low was in Montana, biking outside of the area where John Farnam was raised on his family ranch in the Empire Mines. It’s called Mount Voodoo. I hated Mount Voodoo. My husband, John, was the map guy and kept saying one more mile to the top, and it was very steep and rutted out. All of that in addition to a 95-pound bike, my water, my tent, my supplies, and my fabulous outfit. John kept saying only one more mile, one more mile – and we were about two and a half hours into this climb. So I stopped! And that’s what you do on the Great Divide, you negotiate. We stopped and had a crystal light. John gave me some trail mix. He rubbed my shoulders and told me we were going to make it, as we eventually did.

Anne: You met great people along the way – Miranda the cowgirl, the father and son who rode with you when John was ahead. The recent college graduate celebrating that milestone in his life. Share some stories about those amazing people who you wouldn’t normally cross paths with.

Carrie: Our map showed that in New Mexico, there were lots of areas of water. However, every time we stopped at a water site, it was dry. For those of you that don’t know John, his nickname is ‘Safety Sergeant,’ and his job is to keep me safe. He was really starting to get worried about water. It was Friday afternoon going into Labor Day. This camper passed us; then we would pass them, back and forth. Finally, when the camper was stopped, I tapped on the window and asked, ‘Do you have any water we could have?” The woman hopped out of the camper and called to her partner, ‘Honey! Get out and get them some water!’ Out came a gentleman with a case of water.

Another good story: Out of what seemed like nowhere, a guy in full camo, came up to us and said, ‘What the hell are you doing out here? This is no-wheres-ville.’ We tell him we are biking the trail. He invites us to stay at his campsite, which is just five miles away, and lets us know he can protect us with his gun. We arrive at Irv’s, and he opens a bottle of wine. He is ready to have visitors. Irv is from Arvada, CO. He’s a retired policeman who had pulled a tag in New Mexico and was bow hunting. He offered us unlimited water, wine, and even chips and salsa. Best of all, Irv had a squatty potty. Essentially it is a folding chair with a toilet seat on it. This is luxury.

At the beginning we were afraid of meeting people, not sure of what they would be like, and then you get wine and a squatty potty!

Anne: A lot of this book is about the riding and the miles, but it’s also about family and relationships. You talk about the four days off the trail – John Farnam’s wedding, your son’s birthday. You talk about how a lot can happen in 4 days even when you’re in one place. What were those family insights that came out while you were racking up the miles?

Carrie: Our family has never been so supportive. We would go three or four days without phone service, and I know a few times the kids got really scared. But we were able to stay in touch throughout the trip. The other thing was routine and rhythms. John and I got totally in sync. It’s like at home you have your gym routine, your work routine. We had our Great Divide routine. Also, John and Tashia Morgridge. I have the most amazing in-laws. They biked across the country through Adventure Cycling Association just like we did, but a different route. They also went on to do it three more times, so they were adamant about picking us up at the end. Tasha knew the very best stories and the most amazing parts of the trip would be told at the end. We finished the ride and just wanted to talk, talk, talk. It was a four-hour drive to El Paso, but it felt like twenty minutes.

Anne: So many people I talk to are now thinking about doing the ride – you live to inspire and challenge people in the best ways. What was the biggest lesson for you and what is next for Carrie Morgridge?

Carrie: Coming off the trail I knew that I had to make some changes. I had to stop doing things I didn’t love and start doing things differently based on what I had learned about myself. While there were amazing ‘highs’ on the trip, we had also experienced some very hard days – days where we weren’t sure if we had enough food or if we’d find water in time. There were even a few days where I wondered if we’d make it home alive. One of the things I learned was that in my regular life I did not have hard days. In fact, it had been a very long time since Carrie Morgridge had experienced a hard day. I needed to have this lesson to remind me that not everyone has a life like mine, and that this will inform the way I live my life and do my work going forward.

And, what’s next is another book. My next book is going to be called Courage Money. It’s about how philanthropists can and should take risks with their money. I have great stories from unbelievable people, many of whom I consider mentors, who take chances with their philanthropy dollars and are changing the world. I want to highlight how you can take a little courage money and try something new, something new with 2Gen for example, and possibly make a difference in the world.

More about Carrie and John Morgridge and the Morgridge Family Foundation

Carrie and John Morgridge are the founders of the Morgridge Family Foundation, which they founded in 2002 with the mission to spark innovation and long-lasting impact through transformative gifts. The foundation makes investments that transform communities by creating opportunity for individuals through our non-profit partners.

Spirit of the Trail is Carrie Morgridge’s second book. Her first book, Every Gift Matters, encourages readers to offer their gifts of time or money—regardless of size—and provides tips on how to leverage them for bigger impact on the community. Every Gift Matters was the winner of the Next Generation Indie Book Awards. 100% of the proceeds from both books are donated to charity. Click here to purchase Carrie’s books on Amazon.