“I am an Acelero Parent”: Two-Generation Approaches Through A Mother’s Eyes 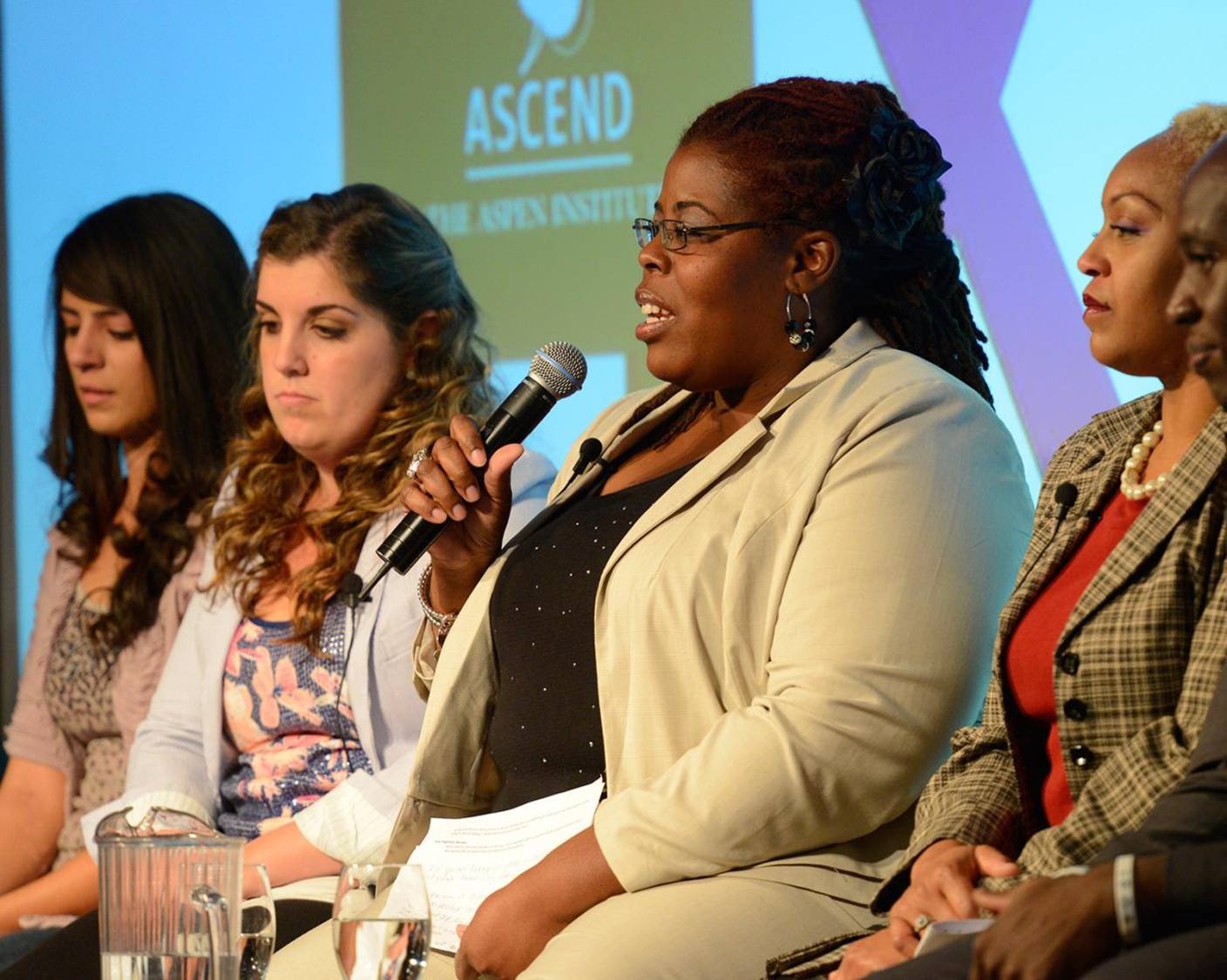 The following blog is excerpted and condensed from remarks given by Tameka Henry, a parent of children enrolled in Acelero Learning, at the 2012 Aspen ThinkXChange in Aspen, Colorado.&nbsp; Tameka was nominated to speak at the Aspen ThinkXChange by Ascend Fellow Henry Wilde.

I am an Acelero Learning parent.&nbsp;

My story started like the story of many Acelero Learning parents.&nbsp;My mother was a single parent.&nbsp; She worked for about 30 years in Parks and Recreation and then in the Human Resources department with the County off and on. I remember how hard she worked to provide for me.&nbsp; And I remember that she never spoke about going to college.

So, at the age of 21, I went to work at the District Attorney&#39;s office and soon after, I had my first child. Everything was going well until at the age of 8 months, he passed away of sudden infant death syndrome (SIDS).&nbsp; It was extremely difficult to go back to work after that.&nbsp; I battled with depression and I really beat myself over the head about his death. I felt like I should have spent more time with him &ndash; but at the time everything was focused on work, work, work, so you can provide and work, work, work, so you can have medical insurance and all the things that a parent wants for their child.&nbsp;But then this child that I am working so hard for is no longer with me.&nbsp; So it was very difficult for me to pick myself up and start over again.

I was blessed a year and a half after that with my son, Zion.&nbsp; I had difficulties throughout that pregnancy and despite doctor&rsquo;s advice I waited it out and my son was born healthy, thank God.&nbsp;But I was afraid to leave him.&nbsp;I was afraid to go to work and I was afraid to go to school. &nbsp;So Zion was always with me and I just babied him.&nbsp;And when it came time for him to go to kindergarten&hellip; he was babied.

When I had my daughters, I just knew it was important to get them in an early childhood education program.&nbsp;At the time, I was just looking for a pre-kindergarten program for my daughter.&nbsp; I didn&#39;t know anything about Head Start.&nbsp; I didn&#39;t know what Acelero Learning had to offer me and my family, and I&#39;m just so thankful that they brought me in.&nbsp; They helped me set goals.&nbsp; The staff asked, “What about you?&rdquo;&nbsp; It wasn&#39;t just about my child.&nbsp;What do you want to do?&nbsp; And who knows why, but I never thought about that.&nbsp; I never thought &ndash; after everything I had been through, I didn&#39;t think about me, but they brought me back into the picture.&nbsp;They taught me that you have to do well in order for your family to do well.

What I was expecting was preschool services for my daughter.&nbsp; I was expecting her to learn her name and numbers and learn how to behave in a classroom setting.&nbsp;That&#39;s what I was expecting.&nbsp;I wasn&#39;t expecting them to say, &quot;Well, we have a Policy Council for parents to participate in making decisions about the program,&quot; or &quot;We have shared governance where parents are involved with the local governing board, and you&#39;ll help set policies for this program.&quot;&nbsp; I wasn&#39;t expecting to learn about reading budgets or having to approve funding applications.

I also wasn&#39;t expecting to learn about the achievement gap.&nbsp; And Acelero Learning did a fine job of breaking down the achievement gap to parents and explaining to us, &quot;This is what it is, and this is what you can do to help close it.&quot;&nbsp; They really broke it down: &quot;Okay.&nbsp; This is the achievement gap, and you can do these four things to help close it&quot; &ndash; positive discipline, consistent family routines, reading to your child for 20 minutes, and providing a language-rich environment.&nbsp; These were all the things that we thought we were doing, but the Acelero Learning staff was very intentional about letting parents know about it.&nbsp;

My daughter is now currently in the fourth grade and she&#39;s reading at a sixth grade reading level.&nbsp;She&#39;s been a straight-A student since she left the program.&nbsp; Acelero Learning made sure that my children were completely prepared for kindergarten. &nbsp;And they were ready.&nbsp; After leaving Acelero Learning, they were ready to succeed in kindergarten.&nbsp;

At Acelero Learning, I&#39;ve learned to advocate for my children.&nbsp; I&#39;ve learned to advocate for other children &ndash; and I know I owe that to Acelero Learning for not giving up on me, and not giving up on my family.&nbsp;So now I advocate.&nbsp; I&#39;m in school now for early childhood education because I know how important it truly is, and I know what it did for my kids.&nbsp; And I hope to one day do that for other children.